Libertarianism is Not Synonymous With The Libertarian Party When you say you're "Libertarian," the average person, if they talk to you at all, will usually mention 'The Libertarian Party' or 'Gary Johnson' etc. -- and generally hold you accountable for all the stupidity that can come from both.

The Libertarian Party is a political party that encompasses much of the libertarian ethos, but one doesn't have to register with the LP to be libertarian. The term 'libertarian' describes a free-standing, fundamental idea that encompasses freedom and liberty at its core, and is comprised of many different philosophies.

There's no direct correlation with the term libertarian and The Libertarian Party; they are not synonymous.

The political spectrum, in popular opinion, is comprised of two components: Libertarian and Authoritarian. These are usually coupled with the economic spectrum to form the resulting diagram: 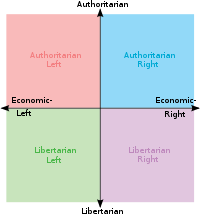 Where do you fall?

The key idea to the libertarian ethos is analyzing political or economic issues, then contemplating what actions or inaction should ensue to result in the maximum amount of freedom.

This is where things become complicated. There is no canonized, official or centrally agreed upon libertarian philosophy. There's a range. Typically philosophies that endorse a form of zero government to minimum government are considered libertarian by nature.

Libertarian philosophies are conceptualized through the core principle of maximum liberty, however, what constitutes liberty is often highly contested-- this is why there is ample debate within the libertarian camp.

This debate is a good thing. We're witnessing human, intellectual evolution in real time. Overall, even though we may all have different conclusions on what defines libertarian, the unifying concept is liberty--where the word libertarian comes from.

So, if you're someone who believes that people should live as free as humanly possible, you may already be a 'libertarian'. Chances are if you're reading this blog, you are one--and that's a good thing.